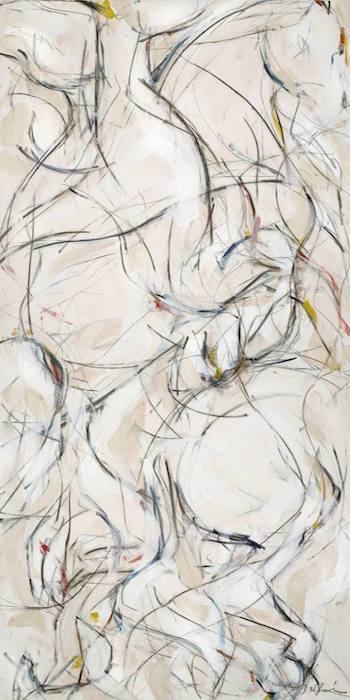 "I love the transparency of drawing, the layering, the marks left behind, the possibilities and depths of a piece allowing the drawing or painting to become what it was meant to be. These abstract works, sensually dynamic and rhythmic depictions of horse and rider in movement explore gestural lines, strokes, and marks that become the subject matter itself, revealing the kinesthetic beauty and strength of the body in motion." - Heidi

Heidi Lanino is a figurative abstract painter from New York with a strong base in gestural drawing influenced by the transformative nature of the movement. She creates work that embodies the freedom and sensuality of her subject with an intuitive immediacy. Her work has been exhibited in the United States and abroad and is represented in numerous private and public collections. She earned her BFA in 1989 from Pratt Institute. Her artistic practice includes drawing, sculpture, ceramics, teaching and community installations.

Warwick Valley Farm Aid – Community mural project. This mural was one of the projects that helped to raise 50,000 to be distributed to farmers affected by Hurricane Irene flooding. – 2011

Carnival – Inspired by Keith Haring Tarps project. The Banner Project is a collaborative piece that brings together our community, our voices, marks and symbols.  – 2016

The Mural Project – Community mural project with the goal of connecting generations through a growing patchwork of art – 2009, 2010

Teaching Artist, Director and School Founder – Fine Arts: Fine art school and summer workshop program for children and adults taught from the perspective of a working artist – 2005 to present

Featured in THE WORLD OF INTERIORS UK March 2017 issue.

Artist's media includes some of or all: Acrylic, oil, charcoal, canvas, paper