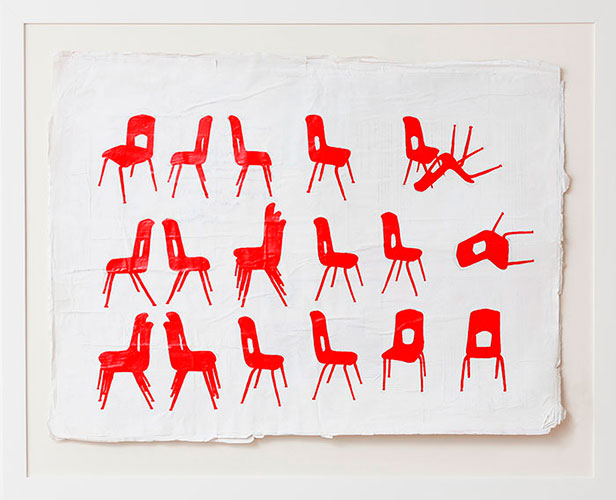 I am in the habit of looking everywhere for patterns; patterns emerging, forming and unraveling. Such patterns could be small details in the physical reality of my day, or the larger social structures that frame my actions. Either way, I have often felt that my job as an artist is to seek out and pay attention to these examples of daily life moving between chaos and order. In this way I am also motivated to use art as a way to better understand the social, cultural, economic and political forces that organize the places and actions that structure my day as a teacher, parent, spouse or neighbor. What are the underlying social patterns or structures that push me to act in specific ways or in specific places? And in what ways can the process of making art create an intentional interruption in these patterns?
- Lauren

Bio
Lauren Bartone is an artist and educator based in San Rafael, California. Her work is grounded in an interdisciplinary balance of painting, collective dialogue, and community work. Undergraduate studies at the Lorenzo de’ Medici Institute of Art, in Florence, Italy and at UCLA (BA in Visual Art 2001), as well as a graduate work in both education (MA in Education, UC Berkeley, 2005) and in the visual arts (MFA in Visual Art, Vermont College of Fine Art, 2012) have allowed her to pursue her passions for both the visual arts and for education. Lauren has worked in various community programs, participated in residencies at the Kala Art Institute, Art Works Downtown in San Rafael and the DeYoung Museum in San Francisco, (Feb 2015), and received several grants including a Marin Arts Council Career Grant, the VCFA Levin/Lutz Award, and the Pirkle Jones Foundation Artist Support Grant. Since 2011 she has also enjoyed working collaboratively with the Fortnight Collective. Most recently her work has considered social patterns and divisions as they pertain to domestic life, motherhood and daily life in her community. She has shown work in the San Francisco Bay Area, Los Angeles, Vermont and New York.